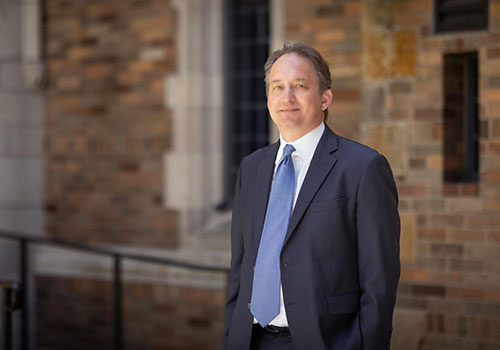 “I give to United Way of Greater New Haven because I think it’s a very effective way to make an important difference in the community I love.” - According to Lewis

Since he was a kid, Pericles Lewis has had a connection to the work of United Way. His mother worked for United Way Greater Toronto as part of a long career in social work and non-profits. She taught her son the importance of building a society where everyone has access to a healthy environment and educational opportunities, a lesson that has had a profound impact on Lewis’ career and his life.

To the extent that I have any talent for leadership in my role as Dean of Yale College, I got a lot of those qualities from my mother. A sense of awareness of different social contexts, ability to get people working together towards a common goal, and of course the importance of charitable work and the non-profit sector in improving people’s lives.

When Lewis began as an Assistant Professor at Yale University 24 years ago, he was quickly reintroduced to United Way through Yale’s United Way workplace campaign, and he became a regular donor. He saw the longstanding partnership between Yale and UWGNH as a critical tool for the university to connect with the community that they call home.

“I’m very concerned about the success of our community, especially the education and health of young people. One of the things I really admire is that United Way focuses on children - on early childhood education, on fighting hunger, and fighting poverty among the young. The university can contribute a lot when it comes to young adults and their growth, but if you don’t start early, you’re not going to be able to really change people’s lives.

I think it’s very important we help children have a good start in life. Our society could and should do more for low-income children.” As Dean of Yale College, Lewis is proud to be a part of the 60+ years of partnership between UWGNH and Yale. Last year, Yale’s United Way workplace campaign raised a record-breaking $1.4 million. He says that Yale faculty and staff are committed to Greater New Haven and want to see it thrive, and that their commitment was galvanized by the way that the most vulnerable were the hardest hit by the COVID-19 pandemic.

“It felt like we were in a place where inequity was getting worse and not better. Giving to United Way was a way to help.”

Lewis joined the UWGNH Board of Directors in 2021 and continues to give as a member of the Tocqueville Society. He says that he has great confidence in the leadership of the organization and the staff team, and that he is optimistic about the future of UWGNH. “I give to United Way of Greater New Haven because I think it’s a very effective way to make an important difference in the community I love.”